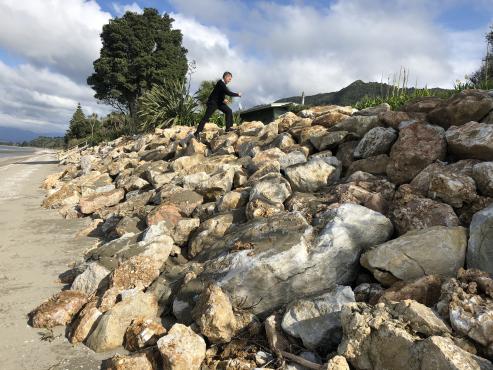 It is with the greatest sadness that we learn that Eric Verstappen, a well-respected and highly regarded member of NZ Coastal Society and its Management Committee, passed away unexpectedly on Saturday 8th February. Eric joined the Society shortly after its formation in 1992. He became part of the Management Committee in 1995 and served as Secretary from 2001 until the time of his passing.

Eric’s funeral and celebration of his life was held in Nelson on Saturday 15th February. Those who spoke included family, work colleagues and representatives of organisations that Eric was part of. The speakers portrayed a person who was willing to give freely of his time as a volunteer and always placed others before himself. Many of us in our Society had an association with Eric through our professions but we knew less about his early life.

Eric was born in Wellington in 1954, two years after his parents had emigrated from Holland. His dad worked as a Technical Draughtsman with NZ Rail, and his Mum worked as a doctor’s secretary. After 3 years in Wellington, the family moved to Tokoroa where is Dad took on a job in the design office at NZ Forest Products, Kinleith Mill. Tokoroa at the time was very much a pioneering and progressive town with the development of forestry, and construction of the new pulp and paper mill. Big brother Eric, his younger brother and three sisters attended Tokoroa East Primary School. School holidays were spent camping mostly at Papamoa Beach for 6 weeks for about 10 years. Eric rejoiced in taking his dads wooden dinghy out through the waves and setting the Kontiki out for fish. As he grew older there were many pig hunting trips with his Dad and brother. These progressed to hunting expeditions for rabbits, and into the back blocks of the King Country for goats, geese and turkeys. At high school Eric was a competitive academic student and runner-up Dux. During this time, he enjoyed tramping trips into the Tongariro National Park with classmates, and rafting trips to remote rivers like the Motu. Eric left school to attend Canterbury University and complete a Masters Degree in Engineering. Here running in Christchurch's Port Hills became a favourite past time.

Eric began his professional career as a Civil Engineer in the Ministry of Works and Development in Hamilton where he worked on roads and bridges. It was here Eric met his wife to be, Heather. In 1980 he and Heather moved to Nelson where he joined the Nelson Catchment Board and began his long career with water.  One project from that time was his involvement in the flood modelling of the lower Motueka River, looking at the ability of the stopbank to protect the Motueka Plains and township, following the large flood of 1983.  Only recently he was again advising on that issue again. When the Nelson Marlborough Regional Council was formed Eric changed roles, advising on consent applications where rivers were affected.  The Regional Council then became Tasman District Council, where he continued in that role, but adding coastal science to his skill set.  His early tasks extended from advising on consent applications, to managing the extraction of gravel from rivers and advising on coastal erosion and inundation and assembling a legacy dataset of valuable survey and photographic information. He helped immensely in shaping natural hazard management and planning in Tasman and Nelson.  From that work, Tasman has provided some of the key case law and planning examples that guide this work nationally and is highlighted as best practice by the Ministry for the Environment. In particular, he led Council’s thinking on how to protect people’s assets by setting minimum ground and floor levels for buildings and subdivisions prone to river and coastal flooding.  He argued strongly against engineering practices he considered disfiguring or harmful to the environment, or pointless in the long run.  He led Council’s approach in pushing up sand to replenish beaches in places like Torrent Bay and in turning old gravel extraction pits in the Waimea river into wetlands and fishing locations. In August last year Rob Bell of NIWA, who went through University with Eric, accompanied Eric on a road show around Golden Bay and Tasman Bay. Its purpose was to deliver the results of a coastal flooding and inundation mapping project to communities. Rob said that Eric was really in his element and doing what he was so very good at - being on site, debating coastal planning and engineering issues with people, and when necessary bounding up rock sea walls to engage directly with property owners. The nature of Eric’s work however, meant he was sometimes the interface between people wanting to pursue self-interest ahead of the wider community good.  Eric took more than his share of abuse as a result, but he always played the issue and not the person, countering arguments with reason and polite discussion.

Eric’s workmates in council describe his willingness to place others before himself in his advocacy and role as union delegate for many years up until now.  He didn’t particularly believe in Unions per se, but the PSA was a vehicle that allowed him to speak on behalf of those unable to protect their own interests for whatever reason.  Eric felt a need to look after the little guy. In negotiations he was never disrespectful, and showed remarkable patience, and a willingness to go back for as many rounds as were necessary.

Nelson was a wonderful place for Eric, Heather and family. Along with son Andre and daughter Jennie, they made the most of the outdoor environment running and walking trails. Eric also ran marathons in Westland, New York, Hawaii, England, Christchurch and Rotorua. He ran in road races, cross country races, hill climbs, road relays - whatever happened to be on that weekend. Eric contributed greatly to the community through serving on club committees - the Amateur Athletic Harrier and Cycling Club and the Nelson City Harriers and helped organise events. He was named president of Athletics Nelson in 2001. Other interests outside work included the Nelson wine club and an extensive collection of fine wines in his garage. More recently he sang with the Nelson Civic Choir.

Eric was an active supporter of the NZCS from the time he joined and particularly through his role on the Management Committee for 25yrs. He attended virtually every annual conference.  He was easy to spot, being tall, sporting that Magnum PI (Tom Selleck) moustache and usually wearing a colourful shirt to complete the image. He would always engage technical presenters with carefully thought out questions. Eric told me once that an aspect of the conference he really enjoyed was sharing his knowledge at the Young Professionals Breakfast. This is a small gathering over breakfast where beginners in our industry get the chance to discuss work experiences and opportunities with those of us like Eric who had decades of work and life experience to share. Members of the NZCS will remember Eric very fondly. He was always very supportive of the society’s activities, we benefitted greatly from his institutional knowledge, and sound judgement on administrative, financial and coastal matters. Eric was one of the most humble and genuine people and his passing will be keenly felt within the NZCS and across the wider coastal community.

May the calm be widespread

May the shimmering light guide you on your journey