Dr Jose Borrero is a Director of eCoast Ltd., a marine consulting and research company. According to the eCoast website “In 2002 Jose earned a PhD in coastal engineering at the University of Southern California (USC) in Los Angeles, California. He then worked as a postdoctorate and research professor before coming to Raglan, New Zealand in 2006 to work with the oceanographic consulting group ASR Ltd. In May of 2012, Jose transitioned over to his new role as a director of eCoast Ltd. Jose’s background is in civil and environmental engineering with an emphasis on water resources and specialising in numerical modelling. He is particularly interested in tsunami hydrodynamics and the coastal effects of tsunamis. Jose’s other research interests include coastal processes, sediment transport, wave breaking, and the design of erosion control and beach protection structures and schemes. He has also been involved in large-scale laboratory physical modelling projects related to both tsunamis, coastal hydrodynamics and erosion.” 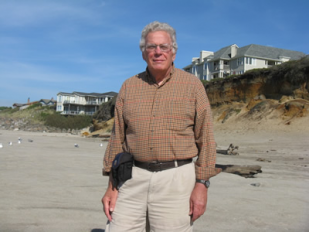 Paul Komar is emeritus Professor of Oceanography at Oregon State University, having been on the faculty since 1970. He received a M.S. degree in Geology at the University of Michigan in 1965, his dissertation having been concerned with erosion problems on Lake Michigan beaches, followed in 1969 by a Ph.D. in Oceanography from the Scripps Institution of Oceanography where he undertook research into the processes of sand transport by waves and currents on beaches. He then spent a post-doc year in the UK, six months at the Wallingford Hydraulics Research Station in England, and six months in the Geology Department at Saint Andrews University in Scotland. Professor Komar’s oceanographic research since 1970 on the Oregon coast has focused primarily on the ocean processes associated with occurrences of property erosion and flooding, with his most recent investigations being concerned with the climate controls on rising sea levels, the increased intensities of storms and their generated wave in the North Pacific, and occurrences of major El NiÃ±os that have dramatically enhanced property losses along those shores. As well as having undertaken research along the West Coast of the United States, Professor Komar’s investigations have included the Nile Delta of Egypt, and in “retirement” the Hawke’s Bay coast of New Zealand. He is author or co-author of over 100 peer-reviewed scientific papers, and two books including the graduate textbook Beach Processes and Sedimentation, published by Prentice-Hall (1976 and1998). 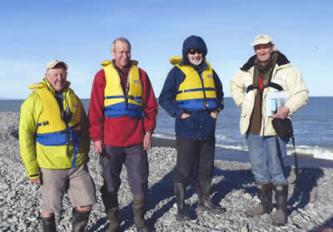 A second generation resident of the coastal settlement Little Rakaia Huts, Bill has been a stalwart advocate for the Rakaia system. In recognition of his contributions, in 2013 he received the New Zealand Coastal Society’s inaugural National Coastal Champion Award. Through his observations, meticulous record-keeping, and ability to bring scientists, planners and decision-makers together he has shined a light on the effects of water resource use on coastal lagoons in Canterbury.